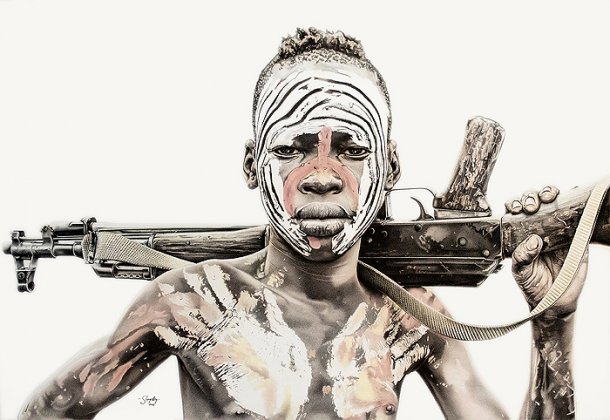 In meeting people who come from African countries to the North, I would always wonder why they come to South Africa when they have such a great education back home.

As one heads south from Addis Ababa, there is a sense of abundance, with seemingly endless cultivation. However, the land that I visited in the lower Omo Valley, in the south, where the Sudanese and Kenyan borders are literally in sight, is exceptionally remote and uncultivated. Here tribes herd their cattle and goats. Some, like the Mursi, lead a nomadic lifestyle (within the confines of the Mago Park). Others, like the Kara, live in ancient villages alongside the crocodile infested Omo River. It is these communities who bear the greatest burden of environmental threats such as malaria, drought and famine.

Once you leave Addis Ababa, depending on the season, the journey down south is a ‘carnage’ reality check. The dry season sees Ethiopian women and donkeys laden in water, playing roadside Russian roulette, as they transport water from the river to their villages. The rainy season sees flowing rivers, meaning fewer donkeys, fewer women, fewer 4x4’s, rendering the roads less treacherous.

Beyond the towns there is no electricity and no running water. Life for the visitor is a bit like that of a tortoise. The shell is either a 4x4 or a tent. The field trips require a team; a translator, driver, soldier, tracker and even a cook. Everyone is in one vehicle, as well as all the food and water. Discovering Africa means discovering its people; how enterprising they are, how wise they are, and discovering their creativity, their art. There is so much to gain, so much to learn. Each visit seems to shed another layer in a complex weave of human interaction.

With regard to the tribesmen I met, few have ever travelled beyond the valley let alone Ethiopia. For most, it is the desire for education and medical intervention which leads to travel. However it is a tiny minority that are undertaking the incredible journey all the way down south.

I’m interested in this “special journey” and your path out of South Africa and into other African countries. How do you think your time in South Africa during apartheid influenced your desire to travel north and to make work influenced by other cultures?

My initial journey beyond South Africa pivoted around education. The 1976 Education riots reflected the injustice of our education system as a tool of oppression. At that point in time, I was of the opinion that it would be iniquitous to be associated with a South African university, as I perceived them as part of the apartheid institution. This is what took me to Holland in 1976, where I was a student at the Vrije Akademie for five years. I produced resistance art and expanded my frame of reference beyond South Africa. I have always been dedicated to recording the culture and traditions of the marginalised. However, travelling to other African countries has been solely born out of a love of Africa. 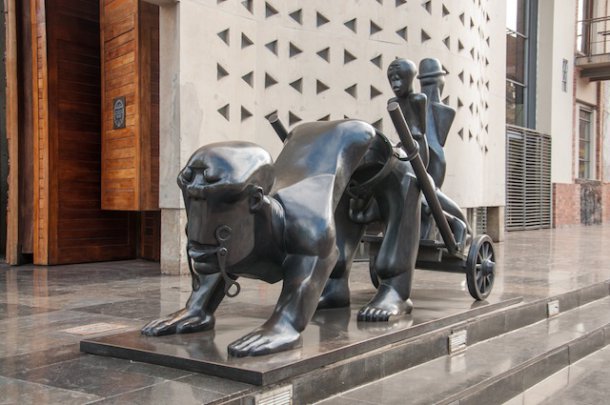 The state of the collection mirrors the troubles faced by South Africa as a country. After a period of exuberance in the years following an astonishing transition to a legal order that protects the rights of all people, the hard and grinding work of maintaining a successful democracy has set in.  The success of South Africa’s new constitution will be determined not only by the strength of the judgments coming from South Africa’s courts, but also by the efforts across all of the country’s civil society to promote respect for the human rights of its people.

CCAC symbolises the best aspirations of our democracy, of reconciliation, of justice, and of transformation… when we’re fighting for the artworks, we are also fighting for the underlying project of making a viable democracy in South Africa. To this end, the importance of the CCAC is not only to infuse the judgments of the court with empathy, but to provoke debate and reflection across a broader swathe of South African society. As the American jurist Learned Hand said: “I often wonder whether we do not rest our hopes too much upon constitutions, upon laws and upon courts. These are false hopes, believe me, these are false hopes. Liberty lies in the hearts of men and women, when it dies there, no constitution, no law, no court can save it, and no court can even do much to help it. While it lies there it needs no constitution, no law, and no court to save it.”

CCAC does not rest its hopes solely on the jurisprudence of the institution whose building it shares.  It promotes the ideals of South Africa’s constitution in a way that both overlaps and is independent of the law through a series of enigmatic and essential messages.  Memorials lie everywhere.  The struggle continues.  We carry each other. CCAC represents a history of intense passion, pain and redemption.  And as it reflects on that history, it challenges and inspires a history that has yet to be written.

C&: What are the motivations behind the  Constitutional Court Art Collection (CCAC) of South Africa?

Albie Sachs & Edwin Cameron: CCAC began when Justices Albie Sachs and Yvonne Mokgoro chose to use the Constitutional Court’s small decor budget of about $1,000 USD to commission a tapestry from Joseph Ndlovu. Titled Humanity, this tapestry is perhaps a wish for the future of a country, which has been so deeply divided by the trauma of its history. The artwork features several people huddling together. All of them have their eyes closed, unable to judge gender, race, or age, and in this way uniting them in their humanity.

In many ways this artwork is a departure from the Greco-Roman personification of Justice as a blindfolded goddess balancing the scales. Used as the symbol of the rule of law all over the world, Lady Justice seems to imply a universal concept of what is just. Her blindness too suggests impartiality, but perhaps when justice chooses to be blind, she’s not as welcoming to those seeking her most urgently. In Humanity, the mirrored action of people closing their eyes seems markedly different: a coming together of communities to consider justice through empathy and togetherness. It is a working concept of justice that is determined by a multiplicity of voices.

Similarly, the logo of the court, designed by artist Carolyn Parton, departs from the symbol of Lady Justice by featuring a group of 11 people gathered beneath a tree. The 11 people represent the 11 official languages in South Africa, which indicates how all citizens of the country are sheltered by the constitution and the rule of law. But, importantly, the figures are not merely sheltered: they actively hold up the branches of the tree.

CCAC has grown out of the purchase of Humanity to include over 400 pieces by artists from all over the world. As an expression of justice, human rights, and reconciliation, the installation of this art collection provides a multiplicity of voices to participate in the way we imagine the future of the country and, perhaps more importantly, engender empathy and unity.  Most court buildings, if they have images in them at all, have pictures of dead white male judges. One day both of us will be dead white male judges. There is nothing wrong with that, but if those are the only images, they say that only men mattered and only whites mattered.

A entrevista integral, na Contemporary and 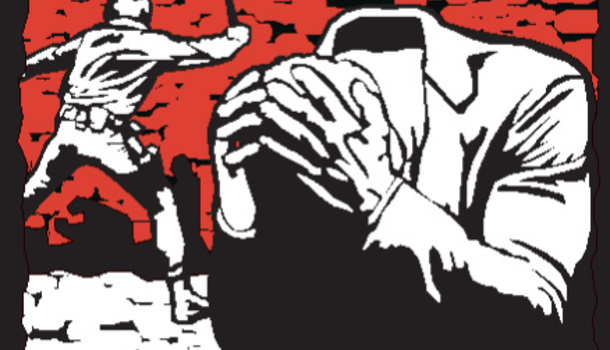 "The banalisation of cruelty and the repetition of often brutal and traumatic events – the Marikana massacre, deaths at the hands of an increasingly paramilitarised police force, the proliferation of bureaucratically induced and popular forms of xenophobia, countless and horrific incidents of rape, an expanding culture of venality, corruption and theft, the rebalkanisation of society and the resurgence of racism, the undisciplined and violent nature of citizens’ protests – have led many, here and abroad, to wonder what kind of social order, or figure of freedom, or even of the human, is being constituted in South Africa.

A few decades after the formal end of apartheid, are we witnessing the emergence of something radically new and insidious, or simply a return to the same shameful, hideous and brutal lie – this time with a black skin and a black mask? Is it true that so many sacrifices, so much hope and so much potential have, at the end, come to this?"

Rise and Fall of Apartheid: Photography and the Bureaucracy of Everyday Life 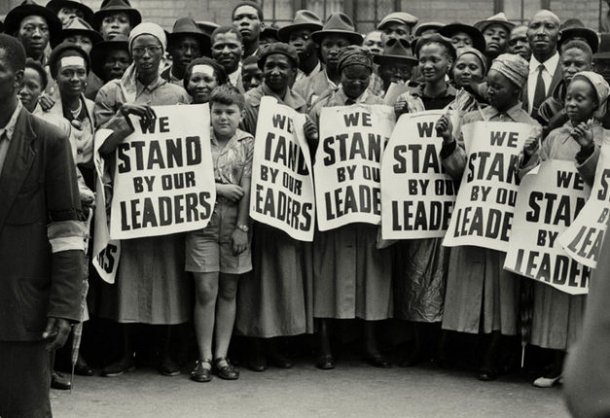 Rise and Fall of Apartheid: Photography and the Bureaucracy of Everyday Life is a photographic exhibition examining the legacy of the apartheid system and how it penetrated even the most mundane aspects of social existence in South Africa, from housing, public amenities, and transportation to education, tourism, religion, and businesses. Complex, vivid, evocative, and dramatic, it includes nearly 500 photographs, films, books, magazines, newspapers, and assorted archival documents and covers more than 60 years of powerful photographic and visual production that forms part of the historical record of South Africa. Several photographic strategies, from documentary to reportage, social documentary to the photo essay, were each adopted to examine the effects and after-effects of apartheid's political, social, economic, and cultural legacy. Curated by Okwui Enwezor with Rory Bester, the exhibition proposes a complex understanding of photography and the aesthetic power of the documentary form and honors the exceptional achievement of South African photographers.