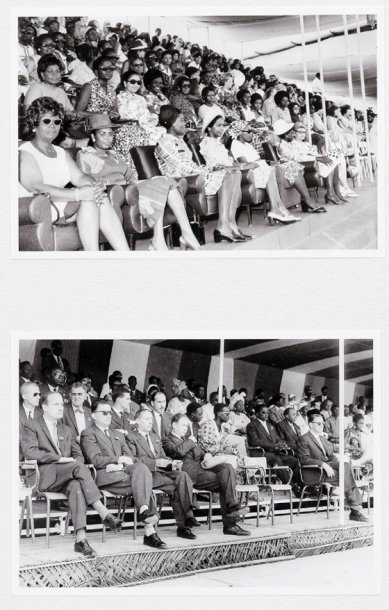 Gauthier Lesturgie : “The Day After” is collective in its purpose and realization, but it is also a collaboration between different organizations involved in the project. Can you explain the role of each of the actors who made this project, and how the collaborations worked? Did you follow a specific plan?

Virginie Bobin  : Every project developed at Bétonsalon – Centre for Art and Research forms around collaborations and partnerships that allow the sharing of knowledge and resources, from a micro-local to an international level. Our aim is to create interactions between artistic and academic research, by creating the conditions for encounters between people who work in different fields and contexts. We believe that “research” can take many different forms, and that shifting the boundaries between disciplinary categories or networks can only encourage the production and sharing of knowledge. Bétonsalon is at the interface between the university we inhabit and the “art world” in which we operate. We can act as a mediator between the two, and with multiple collaborations around a project we can multiply the chance encounters and the circulation of ideas.
For “The Day After,” several groups of collaborators/partners were established. Short- and long-term research collaborations with Paris 7 University, for instance, as well as the UDPN network – a 3-year, collaborative research project that brings together several departments of universities across Paris to investigate the “uses of heritage” in relation to digitization, a question Bétonsalon has been concerned with for a while. (See the project from 2013,Something More Than a Succession of Notes). For us, these collaborations are an important way of sustaining long-term research in dialogue with academics and students, while giving a greater visibility to the artist’s work and facilitating conversations and crossover points.
Our role is also to ensure that the projects live on after an exhibition at Bétonsalon. For “The Day After,” we established a co-production partnership with Tabakalera (San Sebastian, Spain), which will tour the exhibition in April 2016. The team at San Sebastian will work closely with Maryam Jafri in the months prior to the exhibition, as we did here, to develop specific research aspects and new contributions. The exhibition will also tour to Blackwood Gallery in Toronto (Canada) in 2016, and Maryam is working on an artist’s book that will be partly shaped by all the above-mentioned conversations.

GL : The collected photographs of Independence Day : 1934-1975 are displayed in a large mosaic on one of the main exhibition walls. Originating from several archives in former colonized countries in Africa and Asia, they are shown out of geographical context, as part of an archive of archives. This extensive selection makes Independence Day very open to external interventions and comments. Was it decided from the beginning that Independence Day would constitute the starting point of the project?

VB  : Independence Day 1934-1975 is a densely layered work, which triggers multiple questions about the way history is framed by its representations, about the role of photography in the dissemination of its narratives, and about the way the processes of independence were and are perceived in different contexts, national or non-national. The status of these images today is also important… So yes, from the very start we wanted to inscribe the work in a broader perspective and assemble materials in a constellation that would highlight multiple, albeit subjective and fragmentary, possible readings. As I have said, we already had an amazing source of materials in the work of all the researchers who helped Maryam since 2009. It was also very important that neither I.D. 1934-1975 nor the materials surrounding it would be dormant, hence the vivid program of workshops, talks and events to activate them, to generate frictions, to open alternative or even contradictory vantage points. This explains the very open title, “The Day After.”