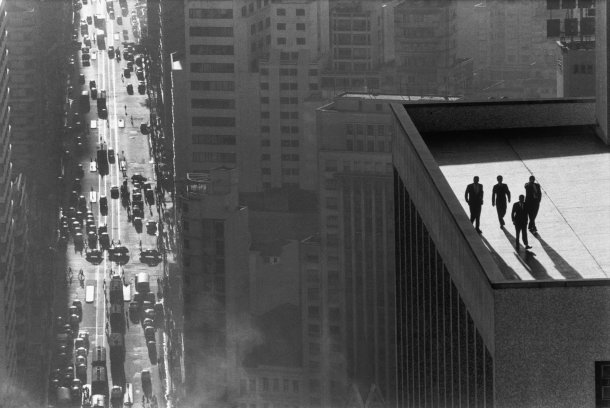 Are they gangsters? Are they bankers? There are certain photographs that seem to have been pulled out of the world of dreams. ‘‘Men on a Rooftop,’’ by the Swiss photographer René Burri (1933–2014), is one such picture. The photograph, taken in São Paulo in 1960, shows four men on a rooftop, seen from the vantage point of an even higher building. Far below them, stark in black and white, are tram lines and cars, and tiny pedestrians so perfectly matched with their long shadows that they look like miniaturized sculptures by Giacometti.

I’m not sure when my interest in ‘‘Men on a Rooftop’’ became an obsession. Through the years it gained a hold on my imagination until it came to stand as one of the handful of pictures that truly convey the oneiric possibilities of street photography. The celebrated Iranian photojournalist Abbas, who knew Burri well (they were both members of Magnum Photos), described ‘‘Men on a Rooftop’’ to me as ‘‘vintage René: superb form, no political or social dimension.’’ Abbas zeros in on the formal perfection of the image, but I’m not sure I agree that it lacks a social dimension. To me, it literally portrays the levels of social stratification and the enormous gap between those above and those below.