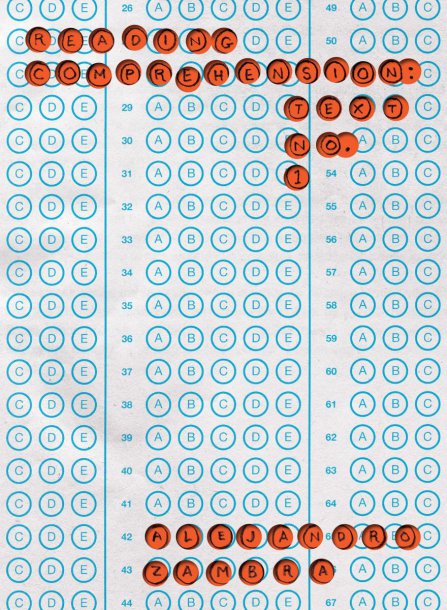 After so many study guides, so many practice tests and proficiency and achievement tests, it would have been impossible for us not to learn something, but we forgot everything almost right away and, I’m afraid, for good. The thing that we did learn, and to perfection—the thing that we would remember for the rest of our lives—was how to copy on tests. Here I could easily ad-lib an homage to the cheat sheet, all the test material reproduced in tiny but legible script on a minuscule bus ticket. But that admirable workmanship would have been worth very little if we hadn’t also had the all-important skill and audacity when the crucial moment came: the instant the teacher lowered his guard and the ten or twenty golden seconds began.

At our school in particular, which in theory was the strictest in Chile, it turned out that copying was fairly easy, since many of the tests were multiple choice. We still had years to go before taking the Academic Aptitude Test and applying to university, but our teachers wanted to familiarize us right away with multiple-choice exercises, and although they designed up to four different versions of every test, we always found a way to pass information along. We didn’t have to write anything or form opinions or develop any ideas of our own; all we had to do was play the game and guess the trick. Of course we studied, sometimes a lot, but it was never enough. I guess the idea was to lower our morale. Even if we did nothing but study, we knew that there would always be two or three impossible questions. We didn’t complain. We got the message: cheating was just part of the deal.

"The story of my life": Alejandro Zambra 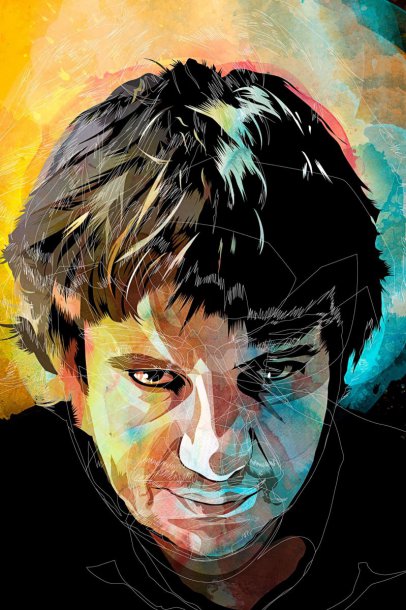 Zambra’s breakthrough occurred with his third novel, “Ways of Going Home” (2011; published here in 2013, in Megan McDowell’s sparkling translation), which seems a different order of achievement from his earlier work. Here, at last, Zambra’s authorial self-consciousness, his reflections on the perils and pleasures of fiction-making, finds a theme that gives it moral gravity and not just formal ingenuity. The novel begins with some of the charm and joyousness of “My Documents.” A nine-year-old boy in a suburb of Santiago witnesses the earthquake of March 3, 1985. He is afraid, but he also enjoys the new excitements on the street—the grownups gathered around a fire, the kids put in tents for the night. The boy notices Claudia, a twelve-year-old girl; a couple of years later, they become friends. Claudia is interesting for several reasons, one of them being that she has an uncle, Raúl, who lives alone: “Raúl was the only person in the neighborhood who lived alone. It was hard for me to understand how someone could live alone. I thought that being alone was a kind of punishment or disease.” Mysteriously, Claudia asks the boy to spy on her uncle, who is rumored to be a Communist: “To me, a Communist was someone who read the newspaper and silently bore the mockery of others—I thought of my grandfather, my father’s father, who was always reading the newspaper. Once I asked him if he read the whole thing, and the old man answered that yes, when it came to the newspaper you had to read it all.” The boy later discovers that Raúl is in fact not Claudia’s uncle but her father, Roberto, a left-wing activist who has been living under a new identity in order to escape the dictatorship’s scrutiny.

In the novel’s second section, the narrator is the writer of the story we have just read in the novel’s first section; and Zambra’s book proceeds like this, the fiction about Claudia and Raúl/Roberto alternating with sections narrated by a man who is writing those very fictions. But what might have been dryly self-involved steadily opens out into Chilean history and political reality. This man, this writer, is trying to come to a reckoning with recent political events, and with the knowledge that his parents were politically quietist (and possibly right-leaning) during the Pinochet years. He has searing memories from his childhood. When he was thirteen, he became aware for the first time that his schoolmates included the children of murdered and tortured parents, and of murderers, too. One day, when he was sixteen, the police chased some thieves into the school’s parking lot and fired shots. The class’s history teacher started crying and hid under the table. “He slowly managed to calm down as we explained to him that no, the military had not taken over again. . . . Of course I knew, we all knew; he had been tortured and his cousin was taken prisoner and disappeared.” The teacher asks the boy about his parents, and the boy replies that during the Pinochet years they “kept to the sidelines.” The teacher seems to look at the boy with curiosity and disdain.

O artigo completo em Story of My Life: The fictions of Alejandro Zambra 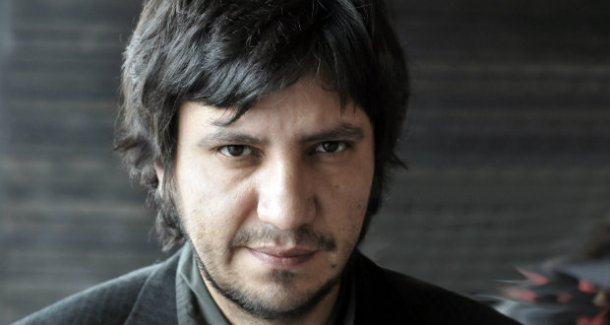