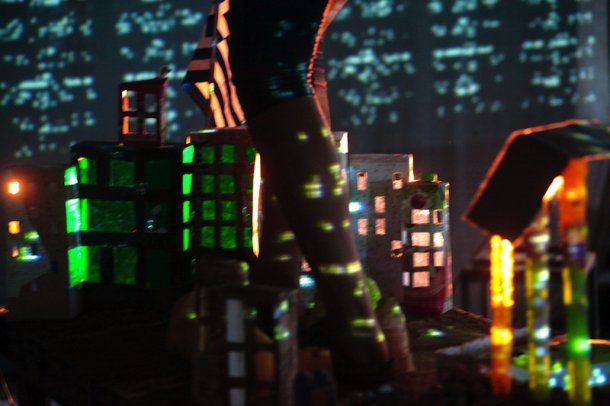 HBM: What is the role of VYRSO in Athens? How do you connect with the city and its inhabitants?

EP: The involvement of local communities and volunteers is essential to the artistic work of ODC Ensemble and Vyrsodepseio. Mixing professionals and amateurs on stage (approximately twenty citizens have joined the company), including communities in the creation process or in the functions of the space is a way to accomplish things together in times where individuality leads nowhere.

Also, the company launched a network of volunteers, artists and activists in different disciplines (theatre, music, dance, visual art, film/video, literature and architecture) in order to create an exchange leading towards the generation of new aesthetics.

VYRSO is situated in a neglected post-industrial area in the heart of Athens, ignored by most Athenians until the project was launched. But, in reality, it is a very lively area with a particularly interesting human geography: two gypsy camps and a strong Afghan community coexist with the local sub-proletarians and the so-called white trash. This is not a no-man’s land after all!

In one sense, the VYRSO project is also a means for Athenians to discover ANOTHER city and its inhabitants. Real people live and work in an area from which industries moved and stray dogs bark in the streets at night. The drive to VYRSO is an experience in itself for most of the audience, “preparing” them for an artistic experience intended (as stated in the ODC manifesto) to destroy theatrical expectations. This holistic experience of dissociation wished to launch Athenian citizens into a dynamic political dialogue in order to embrace change and new potential.

I personally detest the term “community work” and its practices stemming from a centralized authority aimed at controlling social deviation under the pretext of “generous pay-back or volunteer work”.

VYRSO does no community work, VYRSO is a community work as it is the result of a generalized urge to: A) survive collectively B) create new structures and explore the potentials and power of a new way of political thinking in art production, and also in rehearsals.